Hanoi (VNA) – In Asian cultures with a strong patriarchal system, women are considered the weaker sex and caregivers, meaning that they must care for older parents, feed the family and educate children. Nowadays, many women replace their husbands as breadwinners instead of doing household chores.

However, female-owned enterprises are still small-and micro-scale and their access to State support initiatives and policies is limited, according to the Vietnam Women’s Union. 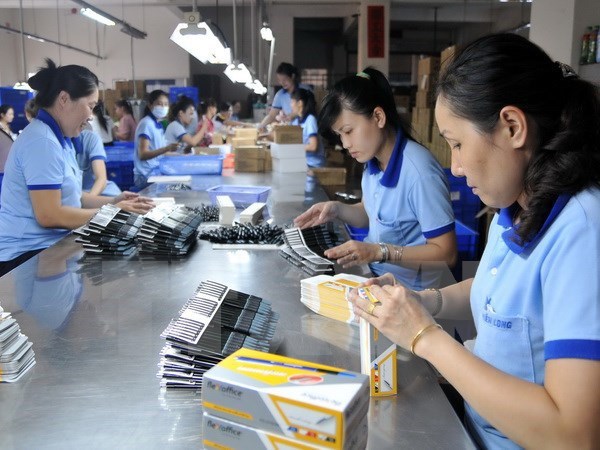 Many women feel guilty about being more successful than their partner so do not dare to think big or act bold (Photo: VNA)

Truong Thi Nam Thang, Director of the National Economics University’s Centre for Social Innovation and Entrepreneurships, said there is a glass ceiling for women in many careers. Many of them feel guilty about being more successful than their partner so do not dare to think big or act bold. In terms of personality, they are generally too meticulous and seek perfection, resulting in not delegating work to others.

There is also bullying in the workplace, especially men who think women are less capable of mastering technical expertise, or understanding consumers or business partners, she said.

In an article, Alicia Robb, founder and CEO of Next Wave Ventures, and her partner said these challenges fall into categories entitled human capital (education and experience), social capital (networks), financial capital (sources of funding), and self-efficacy (confidence). Some of these challenges such as education, experience, and sources of funding are structural in nature, while others, such as networks and self-efficacy, emerge from various social and cultural beliefs and expectations.

“Women entrepreneurial activity is often concentrated in low productivity sectors, such as restaurants and food services, with limited potential for growth in income and employment and that often operate informally. Moreover, empirical evidence suggests that female entrepreneurs are often facing many obstacles to grow their businesses from micro or small to medium or large productive enterprises with transformational economic impact,” said World Bank Country Director for Vietnam Ousmane Dione.

“Empowering female entrepreneurs, paving the way for their business to grow, creating favourable conditions for women to enter high-growth sectors, are crucial for job creation, income increase and poverty reduction”, he added. 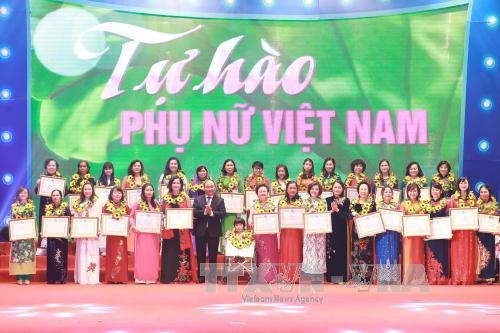 At the event “Proud of Vietnamese women” on March 7, Prime Minister Nguyen Xuan Phuc assured 100 outstanding women that the government has laid out a support programme for women entrepreneurs and start-ups, particularly small-and medium-sized enterprises (SMEs).

“I believe that with continuous learning, determination and endeavours, Vietnamese businesswomen will be successful on the back of State support,” he said, adding that it is also meant to realise the national strategy on gender equality for 2011-2020, in which women-owned firms are hoped to account for at least 35 percent of a total 1 million businesses nationwide.

At the 24th APEC Small and Medium Enterprises Ministerial Meeting that opened in Ho Chi Minh City on September 15, he described the SME community as the main momentum for job creation and contributing to maintaining socio-economic growth and stability.

The PM also suggested developing a sustainable and environmentally friendly startup ecosystem to promote innovation among SMEs in the region and value the role of female leadership.

On June 30, the PM approved the project “Support for women to do business for 2017-2027” initiated by the Vietnam Women’s Union Central Committee, under which, between now and 2025, support will be provided for 20,000 start-up women while 1,200 women-led working groups and cooperatives will be established and consultancies will be offered to 100,000 newly-established firms. Priority will be given to women living in need, ethnic minority groups and the disabled.

Nam Thang lauded the government for its determination to support women entrepreneurship, saying that it leads in fostering start-up spirit among women by providing funding and promoting their role in society. She called on the Vietnam Women’s Union to join in by initiating support schemes instead of pursuing movements like in the past.

On the Law on SMEs Support, she said she is expecting a decree on guidelines for the law to clarify it fully. 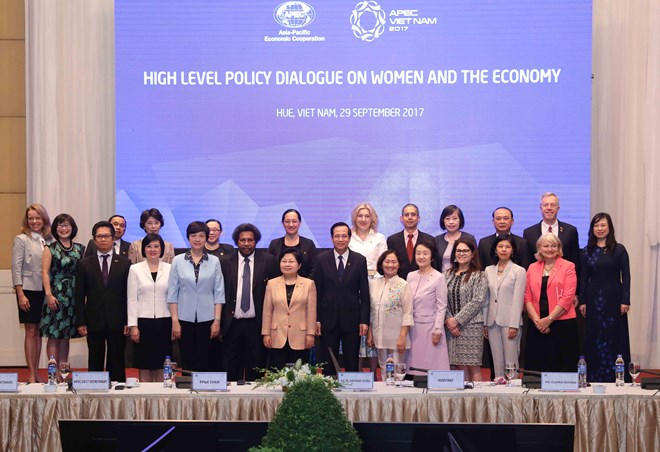 Heads of delegations of APEC economies pose for a photo at the High Level Policy Dialogue on women and the economy in Hue city (Photo: VNA)

In a recent interview with the Vietnam News Agency, founder and Director of the Women’s Initiative for Start-ups and Entrepreneurship (WISE) Tu Thu Hien said the group, founded in March 2017, is in the process of designing models to support female entrepreneurs.

WISE partners with start-up support programmes in its ecosystem and provides support to ensure that more women benefit from them, she said.

Recently, WISE launched the WISE Acceleration Programme designed for women-led travel companies. WISE offers assistance that meets the demands of businesses, making it easier for them to progress.

Under the initiative, WISE also provides corporate consultancy, training and access to capital, markets and other incentives.

In the future, WISE will prioritise the industry and tourism sectors, which are promising for women, both in workforce population and market potential, she added.

Nam Thang, for her part, said the Centre for Social Innovation and Entrepreneurship, established in early 2017, is the by-product of work between the National Economics University and the British Council in Vietnam. The centre mainly operates in research, education-training, and nurturing socially responsible entrepreneurship.

Priority is given to vulnerable pople, young people and women via supplying working offices, holding start-up idea competitions and connecting investors with start-ups, she said.

“We already connected our startups to the top venture funds and mentors in the region. Investors that flew in to do sessions with our companies includes regional venture capital firms such as Golden Gate Ventures, NSI Ventures, Cocoon Capital and Spiral Ventures.  Our mentor network includes local and regional heroes as well as domain specialists such as our partners from Amazon Web Services,” he said.

Meanwhile, Ousmane Dione said: “A substantial proportion of women entrepreneurs remain unserved by financial institutions in Vietnam. The World Bank has an extensive technical assistance programme to expand financial inclusion in Vietnam. Part of this support is to address the financing constraints for the Micro and Small Enterprise (MSE’s) sector in Vietnam, of which a substantial proportion are led by women.”

“The World Bank Group is keen to take part in high level seminars and workshops to highlight the importance of women entrepreneurs and the need to support them drawing from other countries successful experiences.”

Apart from external support, women themselves must also keep striving to earn successes. As the founder and CEO of Next Wave Ventures, Alicia Robb, said “Persistence is key. Entrepreneurship can be tough and it’s often full of ups and downs.”-VNA