Hanoi (VNA) – Several Vietnamese businesses have been successful and stretched their reach globally, and many of them are run by very talented women, said founder and Director of the Women’s Initiative for Start-ups and Entrepreneurship (WISE) Tu Thu Hien.

The country is celebrating Vietnam Entrepreneurs’ Day (October 13), which was launched in 2004 to recognise businesspersons’ role in development. Among Vietnamese entrepreneurs, women have gained an increasingly strong foothold in the economy.

Below is the full interview on this topic the WISE leader gave to the Vietnam News Agency:

[Vietnam’s businesswomen stretch reach to the world]
Why is it important to encourage women to start businesses? What is the role of women-owned enterprises?Encouraging women to embark on business ventures is important as they make up 50 percent of the labour force in Vietnam and hold a lot of untapped potential.

Women have a lot of strengths, even more than men. In Vietnam, to some extent, women are still limited by traditional ways of thinking. They have a lot of potential, initiative and a good mindset, and if they are encouraged and effectively used, they could develop many business models and create high-quality products and services for society.

Women-led enterprises comprise 25 percent of the total number of businesses in Vietnam. Many of them have been successful, grown strongly and stretched their reach globally, such as Vietjet Air, TH True Milk and Vinamilk. These firms are all run by very talented women and have gained successes at the international scale, not only in Vietnam.

Therefore, it can be said that women-owned enterprises play a huge role, greatly contributing to the economy, society and their employees.

According to the Vietnam Chamber of Commerce and Industry (VCCI), the rate of women-owned businesses in Vietnam is the highest in Asia-Pacific, at approximately 25 percent. This rate is even higher according to the Mastercard Index of Women Entrepreneurs 2017 which was released in April at 31.4 percent, putting Vietnam seventh among the 54 markets surveyed in terms of female business ownership. What do the figures say? What do you think about the quality of business projects run by women?

The figures demonstrate the important role of women in the economy of Vietnam. According to research by the Mekong Business Initiative (MBI), women-led businesses have more strengths than men-owned ones such as employing a higher percentage of female workers, spending less per worker on wages, contributing slightly more to the national budget in taxes per worker, and spending slightly more on social insurance.

Though this research was conducted at a small scale in some provinces and not nationwide, to an extent the indicators demonstrate women’s enormous potential in business management and operation.

As WISE was founded in Ho Chi Minh City in March 2017, are there any WISE-funded start-ups that have succeeded, or could you detail some future projects for start-ups? 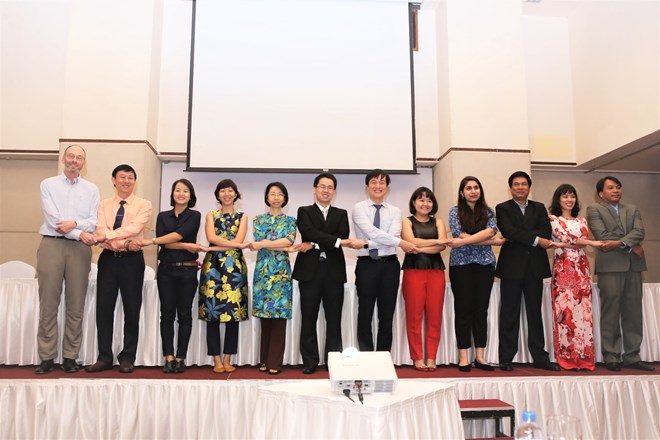 At the launching ceremony of Women’s Initiative for Start-ups and Entrepreneurship (Photo: WISE)

Since its establishment six months ago, WISE is in the process of designing and building models tailored to businesswomen’s demands and matching WISE’s strengths.

WISE also partners with start-up support programmes in its ecosystem and provides supplementary support to ensure that more businesswomen can benefit from them.

WISE recently launched an acceleration programme designed for women-owned tourism companies and has initially chosen four of them. WISE offers assistance that meets the demands of businesses and targets so they progress strongly and sustainably.

Under this programme, WISE will discover the weaknesses of women entrepreneurs and design schemes to best meet their needs.

WISE’s strategy is to help women-led enterprises in the acceleration programme for 3-6 months. Once finished, they can work independently after undergoing capacity-building courses and accessing networks and other market resources instead of receiving financial aid.

In the near future, WISE will continue to focus on agriculture and tourism which are promising for women, both in workforce population and market potential.

Does WISE work to connect Vietnamese women start-ups with the region?

WISE has been cooperating with the SHE (Support Her Enterprise) Investment programme of Cambodia and the Associations of Women Entrepreneurs of Myanmar and Laos to build a network connecting female start-ups in the Mekong region, called “Mekong Women in Business”. WISE is in the process of establishing this portal. Once completed, it will link Vietnamese female start-ups with partners from Mekong countries to share markets, information and knowledge, among other resources.